Representing an Investment of Around £27m

Funding for this major project has been secured from the EU’s INTERREG VA Programme, administered by SEUPB with support from the Department for Infrastructure and the Department of Transport in Ireland, as well as from Derry City and Strabane District Council.

The North-West Transport Hub in Derry~Londonderry has been in operational use since October 2019.  The project fully completed, following works to provide a 100-space park and ride site (including accessibility parking and e-charge points), a bus turning circle and additional greenway works, in November 2020.

The new bus turning area makes it easier to drop off and pick up passengers, while those that prefer to walk or cycle can easily use the new Greenway path linking the Hub to Foyle Street Bus Station and the city centre via the Peace Bridge.

The ambitious cross-border project has the potential to transform travel across the North-West region, encouraging a modal shift in transport habits as we seek to build a ‘green recovery’ in the aftermath of COVID-19.

Constructed to a design by John Lanyon in 1873 for use by the old Belfast and Northern Counties Railway, the building served as one of Derry~Londonderry’s main railway stations for over a century before closing in 1980.  The building has been restored and repurposed for use as a 21st Century transport facility while retaining its’ 19th Century charm and appeal, and is intended to act as a key gateway to the city and wider North-West region.

The Hub is a major scheme that will be a key portal for the North-West region, supporting business, leisure and tourism opportunities, as well as acting as a vital community space for everyone in the city. The project also protects the iconic Victorian station building and will be a catalyst for development in the wider Waterside and Duke Street area.

The facility also offers a unique and vibrant area within the building, an open space where communities and organisations can share their stories, a venue for classes and events or a space to present new ideas.  This is a major feature in a building that is a part of Derry~Londonderry’s fabric.

Translink would like to thank our funders for their support and essential funding to deliver this major project, and to acknowledge the work of the Translink project team and our construction partners Farrans. We would also like to thank the community and commuters of the North-West for their support and we look forward to seeing many more people travelling with us as we come through this pandemic.

Key Facts
What are the Benefits?
Changing Places

A fully equipped Changing Places facility is available for use at the North-West Transport Hub, and staff will be very happy to assist the public with any queries they may have about its’ use.

The North-West Transport Hub marks a major new beginning for public transport in the North-West region, as well as providing the local community with an innovative new event space.  Since opening to the public during October 2019, the restored 19th Century building has played host to a wide range of events, including Hallowe’en and Christmas festivities, choirs and other community festivities, with a diverse group of organisations including Foyle Search and Rescue, Children in Crossfire, Simon Community, Momentum Community Choir, Foyle Deaf Association and the Pink Ladies taking advantage of the space.

Local organisations seeking to book an event in the community space at the North-West Transport Hub, email northwesthub@turley.co.uk 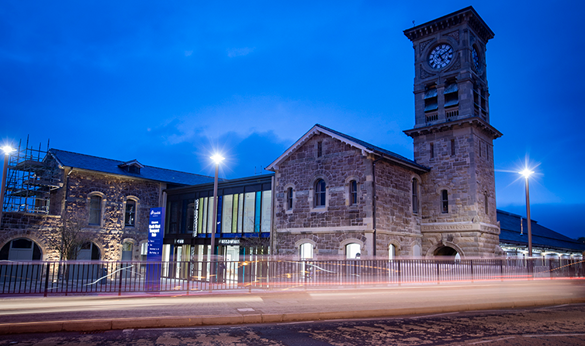 A number of exciting investment projects are already underway that will contribute to the transformation of our public transport network.

More on Improvements and Projects

See all the headlines and press releases in the news.

More on Get On Board